The Portland Metro area has a wide variety of open water swimming spots, including urban rivers, protected beaches, undeveloped lakes, ponds, and even more great spots waiting to be discovered! Each year I hear of more places to swim that had never crossed my mind, so if you have something to add to the list, please comment, or better yet, write it up and share it with everyone. The open water community is growing and together we can create a culture of inclusivity, nurturing adventure, and camaraderie. Let's dive in starting with the Willamette!

When considering a swim in the Willamette there are a few things first to be aware of no matter where you get in.
Okay! Now on to the swims! We're going to start with the order a lot of folks get introduced to swimming in the Willamette: The River Hugger Swim Team!
Human Access Project's River Hugger Swim Team
While most swims in the Willamette run parallel to the shore River Huggers cross the river. Their swims are a unique opportunity to safely cross the river and have the experience of swimming downtown before work. The crossing is about 400m each way. For more information on River Huggers visit: HAP River Huggers Page.
Parking for the Huggers swims can be tricky but there is paid parking available by Firestation 21 and along Water Ave. It's best to get there a little early to make sure you have time to check-in and to catch up with friends (or make new ones!) After morning swims folks usually head to Water Ave. Coffee for hot beverages and pastry. If you're visiting Portland between mid-June and mid-September, be sure to check out River Huggers! 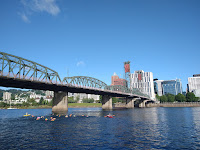 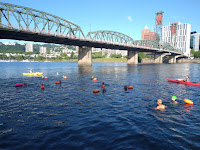 River Huggers swim from the fire Station 21 dock at the east side of Hawthorne Bridge. Since Huggers is a common way for folks to get introduced to open water in Portland, the next few swims will start from the same place, Fire Station 21 dock.
Fire Dock South to OMSI Sub, Tillikum Crossing, Ross Island Bridge, & Tip of Ross Island:
Swimming to various landmarks to the south of the dock is a great way to see the South Waterfront from the east side of the river. Downtown is particularly beautiful in the morning as the sunrises and before the boat traffic picks up. The following distances are estimates, but reasonably accurate. The OMSI dock is the last place to easily get out of the water and walk back to the fire dock, after that plan on swimming these distances as double. Meaning that to Tillikum and back round trip is roughly 2300 yards.
Swimming to the far tip of the OMSI Sub is about half a mile, from the sub to Tillikum is ~250 yards, Tillikum to Ross Island bridge is ~600 yards, and from Ross Island Bridge to the tip of  Ross Island is about another 250 yards. Wow. Okay, that was confusing. Let's try again.
Okay, that might be better. I used Google Earth to get these distances, so they're likely going to be a little short, but they're roughly what my Garmin says for the same segments.
A little info about this section of the river. Getting in at the dock works well, but caution about leaving anything on the dock. It's likely to get stolen. I recommend putting flip flops in your buoy with a towel or even better having paddle support that can carry your stuff. You can also get in at the swim dock south/upstream of Hawthorne Bridge or the OMSI dock where the sub is.
River traffic can be pretty busy from May to September. Dragon Boats launch from the fire dock and, of course, so do the emergency vehicles the fire department uses. Once on the water be careful of jet skis, fishing boats, wake boarders and water skiers (yes, technically they aren't allowed in the downtown corridor, but it's not really enforced), and rowers. Since the river traffic can get busy downtown most folks will stay to the east bank rather than cross the river.
Fire Dock North to Morrison Bridge, Burnside Bridge, Duckworth Dock & beyond! :
Swimming north is a nice way to add on some downtown distance without committing to an out and back swim since it is an option to get out at Duckworth and walk back to the fire dock easily. However, there are no points to get out before then. 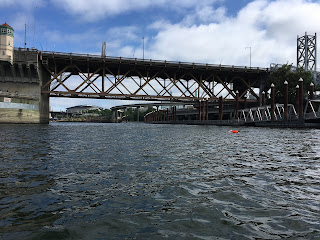 Similarly, swimming north provides excellent views of iconic Portland bridges and scenery. It's lovely in the spring when the cherry blossoms are in full effect on the west bank. Swimming north the river traffic typically isn't as bad, especially staying closer to shore.
Most folks will note the swim to Duckworth from the fire dock is about a mile, and I find this to be true using my Garmin but Google earth says 1600 yards.
If you want to keep swimming North then the next easiest place to get out is Daimler which is 6200 yards / 3.5 miles away and definitely requires a shuttle. From Daimler, you can swim 4 miles to St. John's (fire dock to St. John's is 7.5 miles). The Daimler parking lot is private and street parking is limited.
That's all I have time for today, I'll keep adding to the Willamette swims section as I can. If you would like to add anything or make edits to this page, let me know in the comments! Photos are also welcome 😁
Sections to come:
Swims out of Sellwood! Including Ross Island Classic Circum, the Portland Bridge Swim Route, Sellwood to Milwaukie.
Swims out of Milwaukie! Back to Sellwood and to the Railroad bridge.
From the Clackamas to Milwaukie and my personal *favorite* Clackmas to Columbia aka the Lower Willamette! 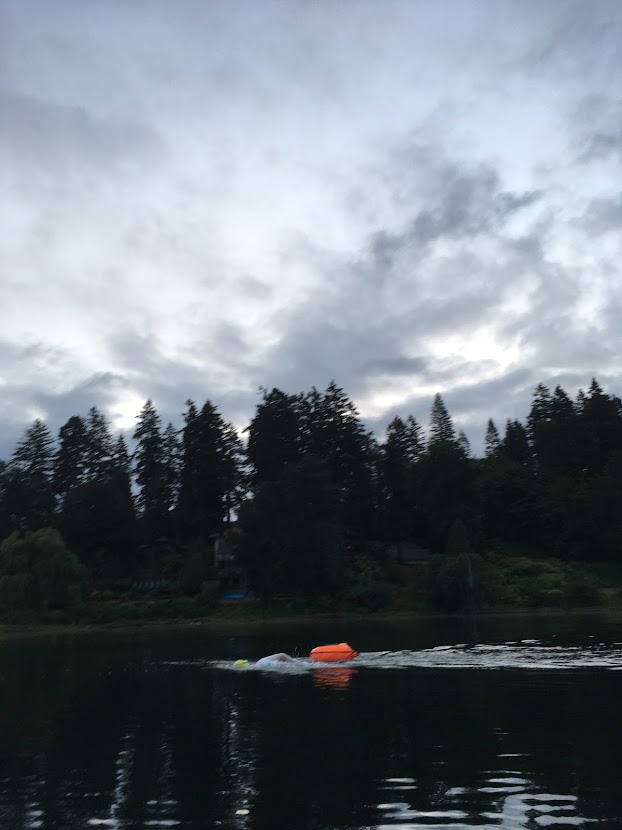 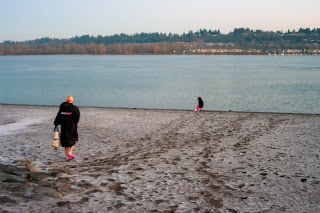